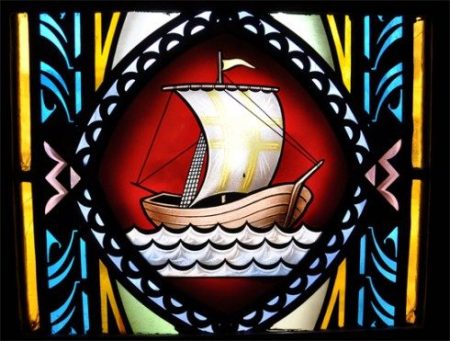 In what is my estimation, John Steinbeck’s finest novel East of Eden, he moves in and out of a sermonic discourse that thunders from another place where beauty dances in the human heart and speaks to the kind of experience that shatters the dim world we so often feel confined to:

Sometimes a kind of glory lights up in the mind of a man. It happens to nearly everyone. You can feel it growing or preparing like a fuse burning toward dynamite. It is a feeling in the stomach, a delight of the nerves, of the forearms. The skin tastes the air, and every deep-drawn breath is sweet, Its beginning has the pleasure of a great stretching yawn; it flashes in the brain and the whole world glows outside your eyes. A man may have lived all his life in the gray, and the land and the trees of him dark and somber. The events, even the important ones, many have trooped by faceless and pale. And then – the glory – so that a cricket song sweetens his ears, the smell of the earth rises chanting to his nose, and the dappling light under a tree blesses his eyes. The a man pours outward, a torrent of him, and yet he is not diminished. And I guess a man’s importance in the world can be measured by the quality and number of his glories. It is a lonely thing but it relates us to the world. It is the mother of all creativeness, and it sets each man separate from all other men.

The world is a bewildering place, where so often we wander in a kind of hypnotizing haze. Each moment can seem like an ever extending monotony where the possibility of something new and wonderful is so distant that we give up on the hope of ever seeing it. And then – the glory – the immeasurable gift of twilight hovering over undulating hills and disappearing beyond the western mountains calls to something within us and pours out of us in a vibrant reminder that we are not alone, rather we are connected to all things. The heart can project its vision beyond the mountains and hover over the cool waters of the sea, while our closed eyes drink in the kind of beauty that can make us at once homesick and at home. The glories come and go, but memory holds them dear and brings them back to us.

Marcel Proust, in the first book Swann’s Way in his magnum opus In Search of Lost Time probes the elusive and powerful movement of memory. The taste of madelines and a cup of tea shared in the company of his mother brings the memory of his childhood thundering back from the forgotten recesses of time past. I think this is also the way our glories work, we carry them with us like silent passengers down life’s lonely highway, then around some strange and unexpected turn they return to us and whisper in our soul the reminder of that sunrise that took our breath away, or the tears shed in our dad’s arms, or the kiss that somehow still lingers on our lips years after the gift was given.

The absurdities of life are not the only contours in the plot lines of our story. The glories are there as an echo of the eternity that we somehow know we were always meant for. There is an unexpected gift that God graces us with in the same world where we so often feel there is nothing new under the sun. Yet, under that same sun there is a glory that touches us when we touch upon it. I try to remember this on the nights where loneliness creeps in, even in the company of those I love dearly, and when the silence broods like a threat. The glory is there, in the madness and the monotony, and if I pay attention to the sacred rhythm of this spinning world, I can, if even for a moment be caught up in its splendor and hold it close in my heart.